Get to know Byron Bay

Get to know Byron Bay

The Julian Rocks Nguthungulli Nature Reserve is a protected nature reserve that is located on the Julian Rocks in the Northern Rivers region of New South Wales, in Australia. The 4,047-hectare (10,000-acre) reserve comprise two small islands, situated approximately 2.5 kilometres off the coast of Byron Bay. This group of small islets out in the Bay are very significant to the Arakwal people, with are several important Dreaming stories associated with Julian Rocks.

In one story, Nguthungulli, Father of the World, who created all the land and the waters, the animals and plants, now rests in a cave at Julian Rocks. The Elders have instructed over the generations that Nguthungulli must be protected from any misuse or it will cause destruction.

According to Elder, Yvonne Stewart, Nguthungulli was used by Arakwal people in ceremonies when the ocean water levels were lower 7000 years ago and it was accessible land. In 1982, after pressure from locals, the area surrounding the rocks was established as a marine reserve, with all fishing and commercial exploitation banned for a 500 metres (1,600 ft) range around the rocks. The area is home to large numbers of marine species, including leopard sharks, grey nurse sharks, wobbegong, a variety of nudibranchs. It’s one of about a dozen critical habitats for the grey nurse shark in NSW.

Scuba divers identify the site as one of the top sites in Australia for its wide variety of marine life. The popular dive spots include


The Nursery
Offers a shallow dive from 5 metres to 12 metres with plenty of reef fish. Located on the sheltered western side of Julian Rocks.

The Needles
Home to many species of nudibranch and leopard sharks in the warmer months (Dec-May). The depths range is 10 to 15 metres.

Hugo’s Trench
A trench runs all the way through Julian Rocks, that is home to turtles, wobbegongs, nursery sharks, and many other species. The depth range is from 12 to 18 metres.

The Cray Cave
A mass of huge rock outcrops and small cave located on the south-east end of Julian Rocks. Depths of 25 metres, you can see turtles, grey nurse sharks, cod and rays. Don’t miss the North Coast Festival of Flavour on Friday 3rd, Saturday 4th and Sunday 5th June 2022. The producers, farmers, restaurateurs, brewers, distillers and winemakers of this lush region are serving up the very best of the North Coast with a series of exciting events and experiences. From Byron Bay to the Tweed, Lismore […] 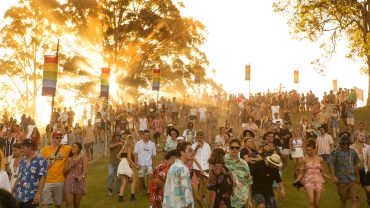 Yep, Falls is ready to elevate your New Year with exciting new venues in VIC and WA and a fresher, deeper lineup and electronic experience than ever before! Message your best festival mates and prepare to party your way into 2023, camping at Pennyroyal Plains VIC or North Byron Parklands NSW, or cityside at Fremantle […] Celebrate Mother’s Day in Byron Bay this year with a brunch or lunch at one of Byron’s many dining options. Here’s a sample of what’s on offer… Mother’s Day at Beach Byron Bay Celebrate the fabulous mother figure in your life with a leisurely lunch overlooking Clarkes Beach. Settle in on the Beach Deck to […]