Australia’s leading regional film festival returns in October with a 10-day celebration of cinema that is a favourite cultural event for locals and visitors from around the world.

Leading with the tagline, Shining Light in Darkness, the 2022 Festival marks a return to connecting local and visiting filmmakers with film-lovers and a full program that embodies the zeitgeist and honours age-old traditions and pastimes.

Sailing is one of them, and the Festival’s Opening Night is Triangle of Sadness, a dazzling and hilariously offbeat satire about the world’s super-rich and their excursion aboard a mega-yacht captained by a deranged Woody Harrelson. Money can’t buy what these people lack … and Triangle is a riotous reminder of that fact.

Surfing tends to attract a more appealing kind of person and the Festival organisers this year have compiled a stunning waves-based selection that fully affirms our town’s favourite activity.

A top attraction will be the Australian Premiere of Birth of the Endless Summer in which Californian surf pioneer Dick Metz revisits his global exploration from 1958-1961 and reveals the untold story behind one of the most watched and beloved documentaries of all time, The Endless Summer. It’s a moving look at a film that will have great memories and meaning for so many boardriders, from veteran to grommet, and for all those who know the beach is the place to be.

Savage Waters combines the search for a mythical wave in some of the most remote and dangerous waters of the Atlantic Ocean with a hunt for pirate treasure on a reef-protected island group. Narrated by the legendary Charles Dance, Savage Waters boasts jaw-dropping cinematography, and follows a group of driven adventurers – sailors and surfers – seeking challenges wherever they can find them, including at the big-wave capital Nazare, in Portugal. Director Mikey Corker captures several catamaran journeys into uncharted waters by renowned skipper and life-long thrill-seeker Matt Knight, accompanied by his family and world-class big wave surfer Andrew Cotton. Injury, illness and deadly danger dog their efforts to find the perfect, never-ridden wave.

Waterman is a profile of the surfing legend, Olympic superstar and Hawaiian icon, Duke Paoa Kahanamoku – the father of the modern sport. From modest roots in Waikiki, Duke swam his way to fame, becoming the face of a changing Hawaii – and a vital part of its tourism industry – as it evolved from an independent kingdom to the 50th American state. He was a five-time Olympic medallist who shattered records and brought surfing to the world, despite facing racism and bigotry. Narrated by Jason Momoa, this original documentary features commentary from surfing’s biggest stars, including newly-crowned Olympic gold medallist Carissa Moore and Kelly Slater, while telling the story of Hawaii’s history and the meaning of Aloha.

Sweet Adventure is the latest masterpiece from award-winning filmmaker Peter Hamblin, who brought us Let’s Be Frank and Riss. The affable South African director has made another quirky gem, this time starring Albee Layer, Matt Meola, Nora Vasconcellos and Selema Masekela.

A surf/life/ecology film that will have huge appeal comes from one of Byron’s own, Matty Hannon, a director with experience producing and directing short documentaries in challenging environments across six continents.

A World Premiere, The Road to Patagonia is a candidate for best film at BBFF2022, for its record of what Matty calls “a physical and spiritual odyssey to better understand our place in nature”. The lives of two strangers are changed forever when they cross paths on the surfing adventure of a lifetime, discovering love, downsizing and the joy of four Chilean horses. Although it is his debut feature documentary, the film includes 16 years of footage from Matty’s life, some of which he found difficult to include, because it was so personal. Alongside its themes of colonialism and globalisation, the film instils an uplifting sense of hope and positivity in the audience – an antidote to the heaviness of the world in recent years.

Such films go way beyond the “Surf Movie” genre to include much of the human condition, and the Festival’s other documentaries tell similarly consciousness-expanding stories, revealing much that is weird and wonderful about our complicated species.

Other docos include Gloriavale which examines the widespread abuse inside the infamous Gloriavale Christian Community cult and the institutional failures that have allowed it to continue. With unprecedented access to the notoriously secretive community, the filmmakers follow a lone family as they mount a ground- breaking legal case against the cult’s powerful leaders. The true extent of Gloriavale’s crimes and the cruelty of its leaders is exposed as the Ready family risk losing their home, their community and those they love for a chance to bring positive change to Gloriavale.

Visionary artist Trevor Paglen is fascinated by mass surveillance and artificial intelligence. After 9/11 these abstract and unseen technologies have become widespread as part of state and corporate surveillance, largely without our knowledge. 5 time Walkley Award winning journalist and filmmaker Yaara Bou Melhem takes a creative approach, in Unseen Skies, following Trevor, as he works to launch an artwork into space to show that our skies are more than the exclusive playground of the military-industrial complex.

A healthy response to this over-reach, and to the behemoth presence of corporates and Big Pharma in our medical systems is shown in Dosed 2: The Trip of a Lifetime, a profound and deeply moving study of the use of psychedelics in the treatment of illness, in this case, a mother-of-four’s colon cancer.

On a happier note is festival favourite Broderick Fox’s Manscaping, an intimate and funny queer re-imagining of the traditional barber shop, which manages to re-style fragile masculinity along the way.

Mandy Nolan is a big hit with Northern Rivers audiences and the documentary about her bid for Federal parliament in the 2022 election is likely to go down well with locals too. Our funniest woman, and most unlikely political candidate, Mandy speaks truth to power, and her freshness and authenticity are further revealed in See Mandy Run, by Bangalow filmmaker Brett Stephens, who followed her around the hustings.

Action in the political arena is also the theme of the acclaimed The Power of Activism, which takes us on an emotional journey from sacred ground above Byron Bay to Antarctica, Indonesia to Pakistan. Six spirited female activists are put under the microscope to ascertain the financial impact of their environmental solutions – from shark conservation to indigenous practices, intensive farming and plastic pollution. The results are astonishing.

The word ”International” in the Festival’s full title is realised by the selection of Feature Dramas, which this year have a particular pertinence, especially Klondike, a story of a Ukrainian family that finds itself at the centre of the MH-17 air-crash catastrophe in the Donetsk Oblast region of Ukraine. Powerless to stop the war with Russia, director Maryna Er Gorbach says her film is an expression of her feelings about occupation, and families trying to survive. Klondike stands against “gun machines” as humankind’s most unnatural creation, she says. “Also, it is a dream about morning.”

The film was Ukraine’s Official Entry for Best International Feature Film at the 95th Academy Awards.

Faithbreaker is another drama about moral truth and forgiveness. Set in Poland, it comes to us from Festival favourite Piotr Zlotorowicz, whose film Mother Earth won BBFF2015’s Best Short Film Award, who returns with his debut feature film.

A young firearms instructor at the Canadian customs college finds himself in trouble in The Noise of Engines, when an investigation diagnoses him with a sex addiction. Placed on compulsory leave for ten days. Alexandre takes the opportunity to make a surprise visit to his mother, only to find himself in deeper hot water.

Other standouts include Decision to Leave, a seductive neo-noir romance from South Korean Park Chan-wook, winner of the Best Director prize at the 2022 Cannes Film Festival; and Everybody Hates Johan, an explosive comedy from Norway.

Supporting the feature films over the Festival is a host of short films – dramas, mini-docos, music videos, animation, surfing snippets – to entertain and enliven.

Outside of the cinema there is a diverse and exciting range of events on offer – from the glamour of the Opening Night red carpet welcome to extended reality opportunities (within a dome!), talks, workshops and opportunities to meet and mingle with some of contemporary cinema’s most remarkable creatives.

One of the judges assessing the work of nominees in the Festival’s Young Australian Filmmaker Award competition will be Jack Thompson, a pillar of Australian cinema and a long-standing supporter of the Byron Festival. Jack will also be present at a lunch event on Saturday, October 22.

Join us in Shining Light into Darkness, from October 21 to kick off 10 days of cinematic celebration. 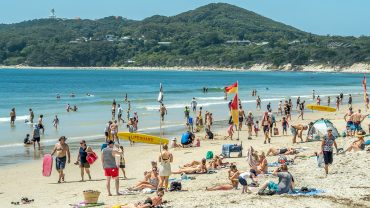 What to do in Byron Bay this December

The start of summer, school holidays + Christmas and New years Eve, December is a busy month for everyone, and there is plenty going on in Byron Bay. Be sure to check out the markets, tours, and restaurants – and if you’re looking to stay a few days, browse our accommodation guide. Byron markets for […]

There is still time for your Christmas shopping at one of the markets in and around Byron this December. Here a list of markets within an hour of Byron Bay and their respective December dates. 3 December Brunswick Heads Markets 8am-2pm : Located in Memorial Park, come alive with the many artisan stalls, which provide […] 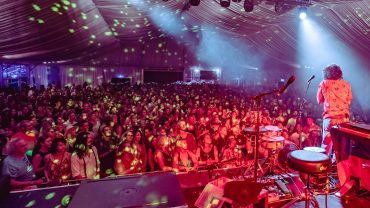 THE GREEN ROOM IS NOW OPEN FOR BUSINESS!

Byron Bay has a new live music venue called The Green Room, at the Byron Events Farm, the home of Bluesfest. The venue was launched on Saturday night, November 26 by Xavier Rudd and Bobby Alu who rocked out to 1500 adoring fans. A permanent structure located on the Bluesfest site in Tyagarah, The Green […]